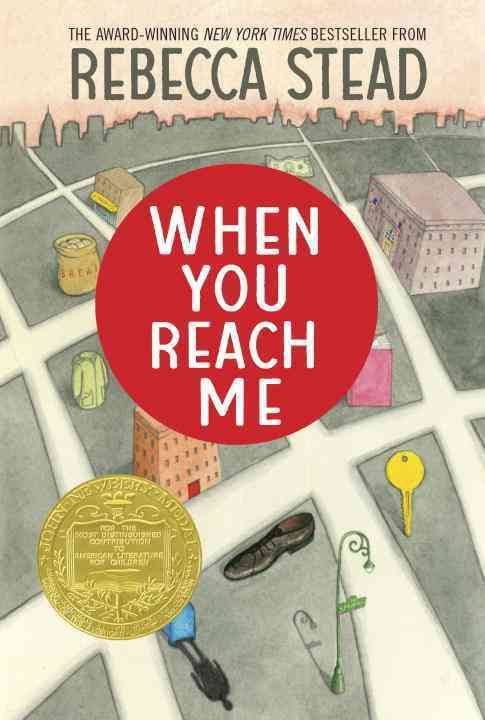 Title: When You Reach Me.

I found this book to be depressing in parts. There were parts of the book where I had trouble with continuing through with the book, because I wasn't sure what the book was leading up to. There were good parts to the book also, especially the part about Miranda's mother going on the game show, and Miranda making up with her friends.

On the other hand, I liked Miranda who kept a positive attitude even when things went badly for her in the book. The ending was also a surprise.

In the end, the good parts didn't balance out the uninteresting parts for me, so I'm rating it as "It's OK".

This book has an original plot with the most unexpected twist in the end, which was very satisfying. The plot twist can be hard to understand though. I can't help but feel that the author originally wrote this book for adults. I can't imagine this being something that kids or young adults can relate to.

First, the setting is New York City in the late '70s, with a sub-plot of the book revolving around a game show called 'The $20,000 Pyramid' which I had never heard of. The atmosphere of the book is grim throughout, with the main characters living in poor circumstances. There was a dark undertone to the book throughout.

Second, the characters are too edgy for a young reader. The main character's mother regularly swipes office supplies from work because she can't afford them, but then at the same time, holds strong liberal views - she volunteers with pregnant women in prisons, and has views so strong that she refuses to let her child eat grapes because she does not like the way grape-pickers are treated in California. I suspect the main character holds the view that it's OK to take advantage of "the system" because the system takes advantage of folks like her. This can be hard for young readers to grasp (and is not explained anywhere in the book).

Mom has swiped a big paper calendar from work and Scotch-taped the month of April to the kitchen wall. She used a fat green marker, also swiped from work, to draw a pyramid on April 27, with dollar signs and exclamation points all around it. She went out and bought a fancy egg timer that can accurately measure a half minute. They don't have fancy egg timers in the supply closet at her office.

The main character, a 12-year old girl called Miranda, is a intrepid girl trying to navigate her way through her life and her school. She is alone in her troubles, but is independent and resourceful. Most of the time, she makes the right choice, but there are times where her street-smarts are too edgy like when she steals from a neighborhood shop-owner who treats her nicely:

While she listened, Belle made me a turkey sandwich and gave me about ten chewable vitamin Cs because she thought I sounded nasal. When she went to the bathroom, I sneaked a little bunch of grapes, which I love but can't ever have, because Mom doesn't like the way the grape pickers are treated in California and she refuses to buy them.

What I liked about this book (other than the ending) is the depiction of Miranda's relationships with her friends, and how she resolves each one of them at the end.

In the end, I think this is a book for advanced older readers; there is a lot of nuance to this book, and the plot twist is not straightforward. This book won many awards, but I am sure this is also because this is the type of book that appeals to adults more than children.